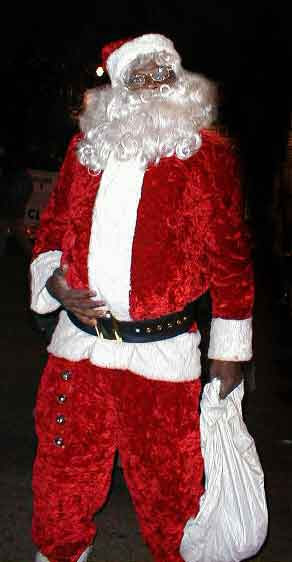 image source
We had been waiting for hours in the warm, dusty street.
The thought of seeing Santa for the first time in my life, filled me (and all the other children in the queue) with giddy pleasure.
It was just about midday, right when the December heat was just about a nice, frying temperature. The continual fresh breeze was trapped somewhere far above our heads because of the tall, two storey buildings in that shopping part of town. The only rustling you could hear was from the wings of the black flies as they rushed past your face, on their way to sample the freshly caught cockles and shark meat they could smell in the market, about two hundred yards away.
Santa came out of his hut to have a cigarette, but some of the parents in the line started shouting at him about not showing a good example to kids and all that.

“What you want from me?” Santa asked. “It hot in that place, and this suit’s killing me in this heat, mon.”
“You bad Santa, you really bad, me daughter think you’s this great, good person and look at yourself,” one man told him.
Lots of people started to join in. The woman behind us was telling her daughter (who was wearing a tenth ‘Happy Birthday’ badge) in a real panicky voice that this is not the ‘real’ Santa who comes through the window they leave open for him every Christmas Eve night.
At six, I wasn’t really bothered, I was never told that Santa came through the window. He never brought me anything, so I guess there was no need to make him up for me.

Santa suddenly lashed out at the guy standing next to him, who was pointing a finger in his face.
“Get outta my space, you moron!” Santa said, as he cuffed the guy on his face with a really heavy hand. The man didn’t take this lightly, he grabbed Santa’s beard and pulled. It became unstuck, held on now only by the stretchy elastic around Santa’s head. Oddly, the guy looked surprised at this, but recovered enough to shopping-bag whack Santa on the back. Santa was bent over, you see, he was trying not to lose his beard, so he sort of went with the pull.

Little children were screaming and some babies started crying and dribbling. Me, I just stood there feeling guilty. Could it have been my fault? When bad things happen at home it’s always my fault. But surely, this couldn’t be, could it?

Santa had somehow managed to hold on to his cigarette until now, he chucked it down and gave a good shake of his fist at everyone. He then gave us all a good cursing, pulled his red trousers up and went back into his hut. Some people went away, but we stayed, and a good thing too, since this was my only ever Santa visit and Christmas present ever.
We eventually got to the top of the line, Esther paid at the door and I went in and got my present. It was a pack of colouring pencils. Some of them did get taken away when I went back out to school and took them to do drawing, which made me weep all the way home.

I didn’t have colouring pencils at all, and they were probably the only ones I had while I was in primary school. Pencils are very expensive, you see.
That was a long time ago though, the pencils have been gone for ages.
I’m not sure that this was a ‘good old days’ story, but Christmas always makes me think of it.

So sad Anne. It did remind me of the time I had my first coloring pencils. A sinterklaas present (I'm Dutch, we don't have father christmas there) when I was about five, I think. I absolutely loved them until one needed sharpening. Every time I sharpened it, the lead fell out until I only had one tiny little stub left. I was so frustrated by this and I felt so cheated, I never used them again.

Oh, Monique, that's so sad. It seems like we had some of the same experiences.

Anne, another episode of Md is posted. It's one of my favorite episodes.

I thought it was time that I showed my face again! Another intriguing snippet!

Thanks Lizzie, it's time I showed my face around yours as well.

We received very few toys, but did get some hand me down ones from our cousins, so were fortunate in that way. Generally Christmas a was time to get necessities all nicely wrapped. I remember stockings with an orange, candy cane and some nuts. That was a special treat. I never told my children that Santa was coming but did tell them the story about Saint Nickolas and they were enthralled with such a generous goodhearted man something which would have made your life a little easier.