Tiger Woods and his lovely family

Thankfully, this is not another one of those celebrity false death rumours. The Internet is today buzzing with news of Tiger Woods’ car accident.


It’s reported that while leaving his home in Florida in the early hours of the morning, Tiger Woods was injured when he crashed into a fire hydrant and a nearby neighbour’s tree.

He was later treated in hospital for minor injuries, including lacerations on his face. In news of Tiger Woods’ injury updates, there are all sorts of speculations of why he was leaving his home at that time of day. We all know how these things escalate.

Of course these are all false rumours and odd speculation, but I’ve read reports that claim this accident was a direct result of his alleged friendship with socialite and business woman Rachel Uchitel (below). There are even bizarre claims that the cuts he sustained on his face were actually made by his wife’s fingernails before she attacked his SUV with a golf club (what else). This, it is claimed, is what caused the unfortunate accident. 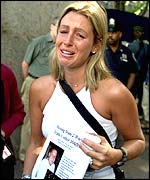 Whatever the situation, I’m sure that all his fans, friends and family are wishing him a speedy recovery. Once again, the web has got its sharp teeth into a story that it won’t let go without a fight.

So, how was your thanksgiving? Any fights and altercations with your relatives?
Posted by Anne Lyken-Garner

The news here didn't mention anything about his wife's outburst or of that business woman..They just said that he might be charged..

My Thanksgiving was great, no drama!

So he's a great golfer, but a crap driver. There's something behind this, for sure.

And why is that woman crying in the picture?

Keefieboy, that pic was taken some time ago, when she found out that her then fiance had died in one of the twin towers.

Oh those rumours that keep the papers going.

That's true, Monique. We wish him all the best here.

now u know all the things happened..rite...