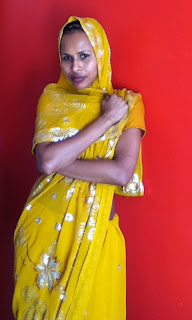 It was by accident that I learned about how dead people vote.

You see, we were in one of the food lines today. Theresa and I were lining up at Wrefords – or I think you have to call it Guyana Stores now - for split peas and cooking oil. We hoped that they didn’t run out of them before we got to the top of the line, like they did last two times we were here. There were a couple of guys in front of us talking politics. They didn’t sound like they knew much, but everyone talks politics these days. Everyone seems to be an expert. It seems like everywhere you go, there’re people whispering about The Comrade and the P.N.C. I hate politics talk because all you hear is, “Ah hear this,” and “Ah hear that.”

There was this young man behind us, who had a small, transistor radio. I could hear ‘The Mighty Sparrow,’ one of those Caribbean Calypsonians, singing that song about how you have to beat your wife everyday to make her love you. And just when he has you thinking, What kind of song is that? he says, “. . . Then she’ll leave you eternally.”
It made you realise that ‘The Mighty Sparrow’ was very clever, and that he wrote a very smart song, which used sarcasm to give you a very important message. Maureen, our English teacher, is doing satire and sarcasm with us. I must remember to cite him next time she asks for an example.

“And yuh know wot? Ah hear that they rigged the elections the last time,” the tall man with the green bag said. He was one of the men standing in front of Theresa and me, in the food line.
The one standing next to him was shorter. He was wearing one of those ‘Puma’ jeans that were so popular. I would love a pair of those – just one pair.
“Ah ain’t votin’ this time. Is waste of time, anyway. I hear that they go to the burial grounds and copy all the names off the headstones, write dem down on the votin’ list, and then mek them vote P.N.C.” Puma jeans replied.

I wondered why ‘they’ had to go off to the burial ground to get the names of dead people. Couldn’t ‘they’ get them an easier way?
“Yuh know that red stuff ‘they’ put on yuh finger when yuh done voting?” Green bag continued. “Well, I hear that some o’ the P.N.C people go home, dunk they finger in bleach and then go back to vote as someone else.”
“But ‘they’ gat everyone name wrote down on the list. How can dat happen?” Puma jeans wanted to know.
“Ah doan know for sure,” Green bag confessed. “But ah sure ‘they’ find a way, mon.”

“Alright! We jammin.” Bob Marley told us on the radio.
“I wanna jam it with you.
We jammin’ . . . jammin’ . . .
And I hope you like jammin’ too
Ain’t no rules, ain’t no vows, we could do it anyhow . . .”
“. . . Ah doan know, pardner. This country getting from bad to worse,” Puma jeans continued.
“Last night, me old girl had a party for she sister, right, and in the middle of cuttin’ the cake...”
“Black out,” they both chorused, laughing like they had just heard a particularly good joke.
“Yeah mon, I tell yuh . . .” Puma jeans began, but a surge of people came back unto us and knocked radio boy’s radio off his shoulder.
“Oye!” he shouted.

When you’re queued up in these food lines (and some people come every day, so they know all the ins and outs of lining-up-success) you have to push as hard as you can, against the person in front of you, so that the entire line is literally joined up together. If you didn’t do this, you were in danger of allowing a ‘poker’ to squeeze himself/herself in front of you.

Most of these ‘pokers’ work in shifts, so Mummy ‘poker’ would start the four a.m shift, get her stuff when the store finally opens, hide it in a bag or in her frock and stand around to wait for a sign of daylight between any two people in the line. Finding this tiny space, Mummy ‘poker’ would then plant herself in. In comes Big Brother ‘poker.’ He would then take Mummy ‘poker’s stolen space in the line, go up and get the two bags of food stuff, be it split peas, flour, oil, or whatever. Brother ‘poker’ would then hide his ration of whatever it was that was being sold that day, and do the same as Mummy did. They would continue this until all of the goods were gone. Obviously, these people have large families to feed, but it was still not fair.

Ahead in the line, someone had caught a ‘poker’ trying to edge in. They pushed forward to stop Miss or Mr. Poker, and the whole line of people went into the barrier at the front of the queue. Our science teacher told us that for every action, there is an equal and opposite reaction; hence the whole line came back unto us.
“Oye!” Puma jeans shouted. “You trampling people back here! He turned back and asked me, “You alright child?”
“Yes, Mister,” I said.
“Yuh know dat dispute wid Venezuela,” Green bag said, as if nothing had happened. He was obviously reminded of this because of the Calypso playing now on the radio. “Calysponians take political issues and turn them into lyrics for songs,” our music teacher had told us. Ours was the only high school in Berbice, which taught steel pan music. We had a band room with a set of steel pans. I liked playing base because you had to stand in the middle of four big pans, and manage your way around, to play them all at the same time. It was cool, and made you feel very talented – even if you weren’t.

“Ah hear that the reason Venezuela want that bit of Guyana is coz they want Mount Roraima,” Green bag continued. “That is we biggest mountain, and they want to tek it ‘way. Is like they want to leave us wid nothing.”

Sang the Calypsonian, and Green bag sang along with him.
“Not a blade of Grass,” was Guyana’s slogan and response to the Venezuelan threat of taking a piece of Guyana. The Comrade Leader ended some of his radio broadcasts these days with, “Tell Venezuela, Not a blade of grass!”
My friend and I think that since Venezuela was right on the border, if they desperately wanted a blade of grass, they could just walk over and pick it.
Yes, I know, we’ve already been told, “That attitude is not very patriotic.”

Theresa and I got up to the top of the line and got a small bag of split peas, and a quarter pint of cooking oil in the little bottle that we had brought with us. The oil was a bit cloudy, and Theresa said so. The woman behind the barrier said we should be thankful because, “Dis young man behind you, ain’t gettin’ none! Oil finished, and we only got four bags of peas left.”

As we were leaving, “Electric Avenue” by Eddy Grant was playing on the radio. It reminded me of something Christopher had told me when he was here. He said that if all the rich and famous Guyanese like Eddy Grant lived in Guyana, spent their money here, and employed people, that it would probably give more of us Guyanese a chance to become rich and famous ourselves.

Hi, thanks for visiting. Your story reminds me that, when apartheid stopped and black South Africans were given the vote, a journalist asked a woman who stood in a line for hours on end to cast her vote, if she wasn't tired of waiting this long. She answered " I have been waiting my whole life for this, a few hours more wont make a difference."

Thank you for your comment. I have been writing scripts for many years but found it a near impossibility to be accepted as such by the establishments of t.v. and producers.

Last year I was asked to contribute to an anthology entitled A Woman's Guide To Saving The World which will be out in March. I contributed in radio script format.

Investing in a state of the art computer with garageband gave me the idea, after slightly rewriting that script, to record it and put it on line, which proved to be successful. More episodes followed and now the serial is going to be broadcast on World Radio Paris on a programme called Cozy Fun Paris. This is a digital and internet radio station based in Paris. I don't know when yet.

Annie, thanks for leaving a comment on my blog. You said it was a small world. Well, it's even smaller than you thought, because I used to live in Guyana.

tnx for visiting my blog..i'm very busy those days but I'll visit you again..greetings from croatia..

By the way, I've only read this part of your book so far, but I'm planning to read a lot more of it. I think it's great.

I really am fascinated by what you do. As I think I said on your blog, it's so original.

I understand what you mean about acceptance from 'the establishment'. Years ago I used to be a radio broadcaster, so when I submitted material for Radio 4 short stories, I thought that I knew exactly what I was doing. The material was fresh and exactly the kind they do.

I was turned down and still feel that this was because of the fact that I hadn't previously made a name for myself. It is very difficult to break into these industries. You've done well to get as far as you have.

REALLY? Where and when?

Thanks for the kind comment. Sometimes opening the rejection letters can be very depressing, but when I hear that others like what I do, it's a great encouragement.

flyinamber,thanks for the visit.
Good luck with all your writing and crafts, you're impressively creative.

Hi,
Just stopping by to tell You that I like they way You create a paint a picture with words!!

Thanks Anna-lys for your comment and for stopping by. Please do come again.

Thanks for your comment in my post on museart;-))... Museart is a community with several different people. Who create together with no words only art and music and a headline.

I have to say that your page is really special. I like it a lot.

Hope to see you soon again. I will come back to you.

Thanks for your comment and visit. I love anything arty and creative, but I think your creations surpass most I've seen and done.