DEATH OF A GUARDIAN ANGEL 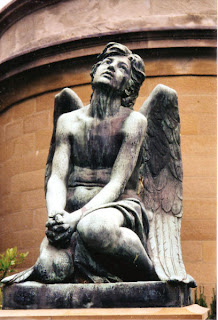 On the second anniversary of her death

The South American International phone connections are sometimes pretty lousy.
This one was particularly crackly and I could only hear two words out of five, they were “Theresa” and “dead.”

Theresa was my aunt, and even though she was only nine years older than me and half deaf, I have to attribute all the good that I learned in my childhood to her. We grew up together in poverty, she cooked my meals, combed my hair and even intervened during some of my beatings when she saw I could bear no more, knowing fully that the wrath of our carer would be turned on her. She was the one who cared about me when I felt like no one else did. My parents were both gone so I lived with Theresa and her mum, my grandmother, the one who abused me.

But that was a life time ago. I was now a grown woman living in England with three children of my own, I had the perfect husband and the blessings of a good life. Meanwhile, Theresa had never married, she’d never had any children and no particular happiness. She had always worked very hard as a domestic, and had survived several nervous breakdowns. It took very little to make her happy, just being loved and appreciated was all she cared about, this is why it was so easy for people to take advantage of her.

At first I convinced myself that I had heard incorrectly, in my state of denial I was sure the noisy phone lines were playing tricks on me. But on the other end my sister’s voice pleading “Hello, Hello,” brought me out of my trance-like state and back into the reality of facing up to what she was saying to me. In the most bizarre phone call of my life, I learned of Theresa’s death but still couldn’t make out how or why since the phone line, as if in a direct act of mischief, got increasingly worse.

Two hours later after miserably queuing up at the only Internet café in the village, my sister managed to send me an e-mail of explanation. Meanwhile, I was inconsolable, I tried to hide my sorrow and uncontrollable tears from my infant children but it was too great a burden to contain within my body. I couldn’t understand how a healthy hard working-woman who was just 46, could die just after a week in hospital.

I have always heard of the stages of grief but never quite understood them till now. After my initial period of denial I became very angry. Outraged that because she was poor, she could die of a treatable disease – Tuberculosis. I was upset that she received no medical help when three months before her death, she had suffered from two detached retinas, another treatable condition.


I was beside myself with worry because I felt guilty that I now had a happy life and Theresa, a totally selfless woman who, with her young but secure influence may be the only reason that I am not a psychopath. After all, with my upbringing with all the beatings and emotional trauma, I should be.


In my acceptance, again I was haunted by guilt. I felt horrible for accepting that she was gone. In my mind I knew that life for her would’ve been very difficult, she would’ve have to change drastically since, in addition to permanent hearing loss, she would now be blind. Maybe it was kinder for her to go, but my heart chastised me for acquiescing, because in doing so wasn’t I in fact saying I was glad she was dead?

I found my life back after her death. The grief is lessening but as it lessens, my guilt grows greater. Guilt of having found life again, guilt whenever I find anything enjoyable, and guilt even every time I laugh at something silly my children do.

My aunt died penniless, not because she never worked for she toiled endlessly. She died without a penny to her name because someone who called herself a friend convinced her to sign her life’s savings over to her before she died.


No one is going to bother fighting for this money, being a very peaceable person, Theresa wouldn’t have wanted us to. This woman will get her comeuppance, she has sold her soul for the grand sum of £200.00.

I feel guilty for living the life whose positive attributes are owed to her. My only consolation is that I have never abandoned her. I have remembered birthdays and holidays and when she had started to go blind, I wrote her a long letter in clear large letters to tell her what she meant to me. My children who I know how to love because Theresa taught me how, sent her bright pictures with colours her one half-good eye could make out with “I love you Aunty Theresa” written all over them. Yes, this is my only consolation, she knew she was loved, and that alone would have made her happy.

My grand plan was to go back to Guyana in a couple of years when we could afford it. I intended to introduce my two younger children who she had never met to my aunt, I knew she would’ve been ecstatic at seeing them. I always thought I had time, now this will never be, she will never cuddle my little ones, her little ones. This fills me with so much pain.

Then I start to feel guilty all over again for finding my life back after her death, but I tell myself that she was aware that I loved her and I know that this pleased her exceedingly.

Still, I'm left with the question, Why should Guardian Angels die?
Posted by Anne Lyken-Garner

This is a such beautiful tribute to your Aunt..

She might be gone in the physical sense, but in your heart, she has a home forever.

Thanks Icy, and you're right, I'll always think of her.

Anne, you and your family are her legacy. You are a result of her love and kindness, and I doubt that she'd want you to feel guilty. Don't you think she'd want you to enjoy the life that you've made for yourself without having to look back with regrets?

Dabrah, you've hit the nail on the head. She's always wanted me to be happy, she wanted the world to be happy (and I'm not just idolizing her because she's gone). She was a true gem.

Leigh, welcome back and thanks for your comment. I hope to be seeing much more of you.
Anne

I am sure that from wherever she is, she is looking down at you with pride and admiration that you have made such a good life for your family and are such a tremendous writer.

Thank you so much Monique.I've left a comment over at yours.

Anne, thank you for that advise. Helen (Sarah in MD) gave me a CD full of sound effects last weekend and a car crash is on there (mind you there are about ten types of car crashes on it).

I prefer to make my own but I will use that sound as it has a better effect.

My own device was (and it worked!) a towel on the desk, on the towel an upside down baking tray, oven gloves on my hands and a quick boom boom with those gloves on the tray.

I have also today created a Middle Ditch group on facebook. The membership is rapidly growing.

Hi Anne, I found your link through your comment on Simon Trewin's site. You have a beautiful story; reading it brought back memories of my childhood.

All the best with your book.

Great news Monique, I shall be over soon.


Anita,thank you for reading, for making a comment, and for your compliment. It really helps to know that what I write is being read.