Children Can Be Funny, Can't They 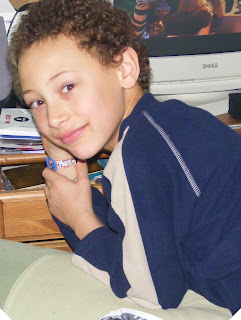 My husband and I walk with the kids to school every morning. To make the journey less tedious for them we usually play various guessing games. Yesterday morning the two girls ran ahead leaving my husband and son Gabriel to play “I Spy” on their own.

Lost in my own thoughts, I walked slightly ahead of them could hear them chatting away animatedly behind me.

At one point Gabriel shouted out “Tentacles!” I smiled as I heared my husband explain for the umpteenth time that the point of “I spy” is that you could actually see the object in question. Needless to say, tentacles are not often on display during a lazy walk on the way to a primary school in the somewhat-but-not-so-leafy suburbs.

From this point onwards, Gabriel would shout out “Tentacles!” in frustration every time he could not guess what his father had his eyes on.

The quiet streets almost reverberated with the shout of “Tentacles!” from an anxious little boy as he battled to get his little mind around what the real answer could be.

After about the tenth time I stopped to let them catch up with me and said, “Gabriel, you sound like you’re saying ‘Testicles’” in the hope of making him stop. As a particularly shy child, who still suffers with a social anxiety disorder, he finds it difficult to look people in the eyes, and frightening when his voice is heard. Surely calling his attention to the fact that he sounded like he was saying a private body part (although we let them refer to those body parts by the usual childish names, we’ve always made sure that they know the proper scientific names as well) in public would calm him down a bit.

“Testicles!” Gabriel shouted, at the top of his voice in the quiet street.
“Shhh.” My husband and I said simultaneously.
“Testicles!” He shouts even louder.
“Gabriel is saying testicles” his older sister giggled, running back to us to see what was going to be done about that. She delights in the idea that everyone gets equally disciplined, as her life is never fair if the others don’t constantly get told off.
“Stop it Gabriel” his dad was shouting in that impossible kind of whisper-shout we parents manage to conjure up for situations exactly like these.
“Testicles!” That boy had got something to say and no one could hold him back now.
“Testicles! Testicles!”
But I was laughing. You know, sometimes in your life, your kids do something so funny, that even though you know you should stop them, the child in you just wants them to carry on because naughty can sometimes be very funny? Well, I certainly thought it was funny so I walked ahead as fast as my legs would go, so that he couldn’t see me laughing. After all if he did, wouldn’t that make him do it even more. But that boy didn’t need any help.

When he was a baby we used to say that he cried like a sheep. His voice has always had a low-pitch quality to it. However, in an ironic sort of way, he can scream like a woman in labour - high pitched and blinding, yes I meant to say blinding.

Behind me he screamed with the largest smile on his face.
“Testicles!”
“Gabriel do you want to be punished?” my husband was asking in that freaky whisper-shout kind of voice. He sounded like he didn’t know what else to do to make him stop. Me, I was almost running away because the laughter was coming faster now, couldn’t wait. No sir. Had to laugh. Must laugh.

“Testicles!”
“Gabriel, stop or you’ll get punished!” My husband was now also shouting at the top of his voice.
Gabriel grudgingly stopped shouting, but by then us girls were almost foaming at the mouth with laughter.
But he had to get a last one in.
“Testicles?” he asked silently. But then he took one look at his dad’s face and didn’t bother saying anything else.
“It’s your fault.” My husband said to me, but he was smiling too.
“What? Testicles?” I asked.
Posted by Anne Lyken-Garner

Very funny...I was laughing as soon as my eyes caught that word...

Very funny - I love your description of the whisper-shout frantic parents do in that sort of situation! You caught it exactly. We've all been there. It brought back memories.

Thanks Icy and Leigh, kids can be fun but so can we.

Tentacles or was it testicles? This bit has as a nice flow and a simple ending. Im sure even the most conservative person must have ended up laughing, or smiling atleast.

Thanks Rookie, I think you're right. Thanks for the comment.

What a lovely story! Funny memories are great.

Oh that was really funny! I know what you mean by kids can be funny (teehee) I've been a kindergarten teacher for ages....they do have their moments and I agree with you, sometimes, you just don't want to stop them -hahaha... You have a lovely family, Anne!

kids can defently be a joy.I love your pictures. Your a very good writer as well.I hope you'll visit my blog and tell me what you think.