If you’re surprised that I’m talking about coconut crabs on ‘Sunday’s Child Lives At Annie’s House’ I don’t blame you. But here’s why:

If I said that I knew exactly what caused the crash that killed Princess Diana the first thing you’d say to me is, ‘but you weren’t there.’ I would stutter and splutter to try and put forward some kind of argument to validate my claim, and you’d be right to point a finger in my face and laugh at my ignorance.

Scientists however, have a history of doing this sort of thing, and because they’re scientists people all over the world subscribe to the brilliance of their ‘findings.’ (And this is where coconut crabs come in).

Amelia Mary Earhart, an American aviation pioneer and author, disappeared in 1937 over the Pacific Ocean in the general vicinity of Howland Island, which is halfway between Hawaii and Australia. Of course, this island is claimed by the US, and why not. It’s rich in natural resources and sits in a strategic location. No one knew where Ms Earhart was or what happened to her. Yet, years later it’s claimed that she arrived on one of these Islands (the home of coconut crabs). This has caused widespread Internet conjecture that upon arrival, she must have been promptly eaten by one or a few of them. 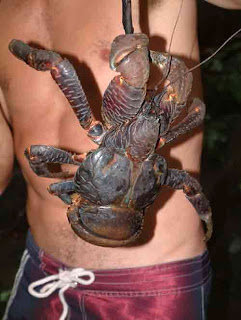 These crabs as you can see are giant crustaceans. They can crack a coconut open by just squeezing it with their pincers. They’re 3 feet from head to toe and weigh about 40 pounds. When I was a little girl growing up in South America, I had hundreds of run-ins with coconuts, mainly trying to chop them open with machetes. This took me several minutes to achieve, so I for one know how determined coconuts can be.

If poor Amelia had a run-in with one of these, that strong determined woman she proved herself to be, would’ve had it stewing in a pan before you could say ‘curry sauce!’


So, what weird thing have you heard lately?
Posted by Anne Lyken-Garner

Interesting arguments. I'm not sure what to believe.

Hi Judy. That's exactly the point. No one can be 100% sure about what happened unless there were two or more witnesses. Scientists are intelligent, but their research is also based on a measure of guess work.

Eaten by crabs? I had not heard that one. I have been a bit out of things lately as I have been busy so I have not updated myself with the latest weird news :)

wow now wouldnt wanna find one of those in my crabtree... lol

thanks for following shaking the tree..

Welcome to my blog, Mary. Hope to see you again soon.

LOL I'm sure you're right about Amelia and the stewing pan if she happened to run into one. But who knows what really happen. It's one of those mysteries that will probably never be definitively solved.

I've given you an award at my blog http://www.StarlightBlog.com Don't worry if you don't have time to do the whole award thing. Just know that your blog is appreciated.

Thanks, Mary Anne. I'm on my way to check it out. You're so kind.